August 3, 2017 (Ottawa, Ontario) - In response to global concerns about declines in pollinator biodiversity, Friends of the Earth is launching its second “Great Canadian Bumble Bee Count” and offering downloadable “Census Cards” to help identify the bees.

The campaigns asks people to take pictures of bumble bees and to upload the photos with observations so that scientists can better track the bees and learn more about them. The  “Great Canadian Bumble Bee Count” runs until September 15, 2017. Participants in last year’s event submitted 1218 photos and observations for the census including 12 submissions for the critically-at-risk Yellow-banded bumble bee (Bombus terricola).

Participants can upload their pictures to the Census Form and can also encourage more people to participate by posting pictures on social media using #BumbleBeeCount.

More than two-thirds of the food crops we depend on benefit from pollination by native bees, honey bees and other pollinators. Bumble bees are capable of buzz pollination making them particularly effective pollinators for certain crops and flowers - including blueberries and tomatoes. 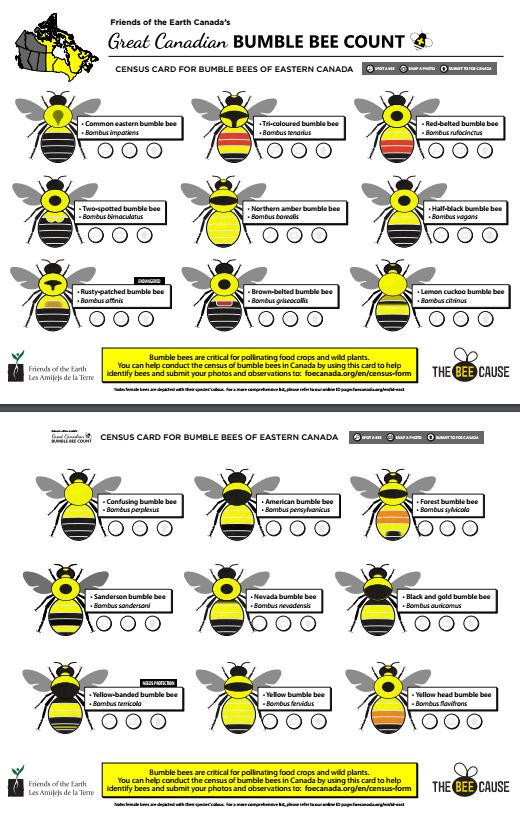 “We know from our recent poll that Canadians care deeply about saving the bees but they know very few of them by name,” says Beatrice Olivastri, CEO, Friends of the Earth Canada. The national survey, which was released in June, found that almost seven out of ten Canadians were either ‘concerned’ or ‘very concerned’ over the health of bees. “We hope people will volunteer to go out with our Census Cards and take photos of the bumble bees wherever they are - cottages, national parks or their own garden. By sending Friends of the Earth their photos and observations, they’ll be helping us learn more about what needs to be done to protect bumble bees.”

“Bees are up against big stresses like habitat loss, climate change, pesticides and diseases,” says John Bennett, Senior Policy Advisor, Friends of the Earth Canada. “Canada has over 40 species of bumble bees but many of them are in trouble. Photos and observations about bumble bees from the Great Canadian Bumble Bee Count could signal changes in how bumble bees are dealing with the same issues you and I face - from heat waves to fires and floods. This is critical information and we really need help from concerned citizens.”

The Rusty-patched bumble bee, once abundant in southern Ontario is now almost extinct and officially designated as endangered. Six more bees have declined to such an extent that scientists have advised the federal Minister of Environment to take steps to protect them. There are over 850 confirmed species of wild native bees in Canada with little proper monitoring.

Honey bees have dedicated beekeepers to take care of them but wild, native bees need more support. “We think it’s a priority that Canadians learn more about these bees,” says Olivastri. “We want Canadians to be just as familiar with Yellow-banded bumble bees and more of the 40+ bumble bee species as they are with Monarch butterflies.”

Beatrice Olivastri, CEO, Friends of the Earth Canada 613-724-8690 or Beatrice@foecanada.org